Dr. E. Alma Flagg was born in City Point, Virginia in 1918 and first migrated to Newark with her mother in the 2nd grade.  Her father, who died when she was 12, was born in North Carolina while her mother was from South Carolina.  Dr. Flagg would return to Newark in 1943, after graduating college and time spent teaching in Washington, D.C.  She spent the rest of her forty-year career in Newark, where she would distinguish herself as the first principal of an integrated school before ultimately becoming Assistant Superintendent of Newark Public Schools in charge of curriculum.

She recalls life in mid-century Newark, remembering Newark and New Jersey editions of the Chicago Defender and Afro American newspapers, as well as WNJR radio, as being trusted sources for news and information in the African American community.  She offers a pointed definition of “integration” as being the, “Arrival of the first Black to departure of the last White.”  Dr. Flagg was an active member of the NAACP, League of Women Voters and Weequahic Community Council in addition to her work with the Newark Preservation Landmark Committee through which she fought to save the Historic Plume House from being razed for Interstate 280. 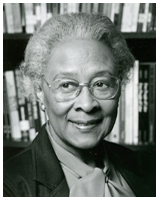