Owen Wilkerson was born in 1943 in Halifax, Virginia. He was four years old when he came to Newark. The family’s first home was on Barclay Street. His position at the time of the interview is in the Office of the City Clerk.  Wilkerson was also a reporter for both The Afro-American newspaper where he covered the 1967 uprising and the Newark Evening News until it went out of business. His civil service included working with Newark’s Board of Education. He later became aide to Assemblyman Eugene Thompson, working on tenants’ rights’ issues.

Mr. Wilkerson at one time lived on the same street as Redd Foxx, on Hillside Avenue. Mr. Wilkerson reminisces with great detail about the various neighborhoods where he lived. Wilkerson’s first paying job after graduating from Weequahic High School was at Cooper Sportswear on Sherman Avenue in 1961. After that he went to college wherein his next job was in the summer at the Newark post office where his salary covered a semester’s tuition. He remembers High Street as an important site of pride and a model of living for Newark’s African Americans. 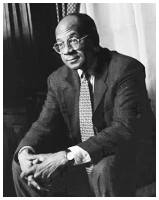