Richard Cooke was born in Newark in 1935 to a homemaker mother from Alabama, and a Buffalo-born auto mechanic father whose family originally came from Raleigh, North Carolina (where his grandfather was a minister).  A retired schoolteacher at the time of his interview, Cooke described himself as a proud product of the Newark public school system to which he returned to teach for 35 years.  He noted that, as a student, he had not had a Black teacher in either Newark or East Orange Public Schools.  After completing a BA in English and Speech from Shaw University and an MA from NYU, Mr. Cooke was drafted into the Army, serving 28 months.  He then began teaching at Bruce Street School for the Deaf.

Throughout the interview Mr. Cooke describes the Newark neighborhood in which his family lived on Camden Street, including the popular commercial district on Prince Street and discriminatory practices of merchants downtown.  An active member of Bethany Baptist Church since 1948, Mr. Cooke recalls doing a reading of William Ashby’s book there.   He also recounts his admiration for Amiri Baraka and recollections of other notable African American Newarkers such as Irvine Turner, Ken Gibson and Judge Harry Hazelwood.  Mr. Cooke’s family would eventually move from Newark to East Orange in 1950. 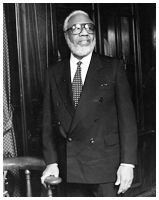